Was ist los in der SCD-Welt in Deutschland?

The Summer Course in the Kuckucksnest brought together all the things I enjoy most about Scottish Country Dancing… and more!

It begins with arriving to check the list of attendees and greet the ones who are already there. Meeting some dancing friends for the first time after long pandemic years, seeing others again after having danced together at a ball only shortly before… and of course meeting new people and making new dancing friends.

Teaching a class for intermediate and advanced dancers is quite the challenge in order to balance the interests of the attendees. Teacher Deb Lees admirably managed to give everyone a good learning experience and reminded the group to “Straighten your lines”, “Close in third position”, and “Pull your body upright” regularly (alas, that was well deserved). Her choice of dances was designed to reflect the tradition of Scottish Country Dancing (e.g. The Nut from 1827) while at the same time including modern elements, e.g. the fun strathspey Broadway with its classic Broadway musical tunes. And The Queen’s Quadrille was an unusual dance with an intimidating volume of instructions – which flowed smoothly nonetheless once she had taught it.

Class musician Silke Grosholz lent wings to our feet as usual, joined at times by Deb’s husband Roger Malton playing the fiddle as well her own husband Thomas Naefe on the recorder. And even Deb herself joined the band in the evenings.

Because of the very hot weather the afternoon classes were described as “optional – weather permitting” on the schedule – however, as per Deb’s request everyone took part in them, and many joined the (truly) optional Ladies’ Step classes to learn The Silver Jig. Those with ballet or Irish dancing experience clearly had an advantage at that.

Due to the fact that none of the CGB board members were able to attend, we had the pleasure of Angelika Schmidkonz being the appointed course manager. She organised the evening dances in an efficient and particularly inclusive manner: If you requested a favourite dance to be put on the programme, you got to mc it yourself. This resulted in a good variety of dances and talk-through styles, as well as allowed the opportunity to mc for a crowd that is not the SCD group at home. For me, that was as scary as it was fun!

The Kuckucksnest charm worked its magic again, enveloping everyone in a cosy atmosphere fuelled by fresh, tasty meals, a well-stocked drinks fridge and the astonishing shower mojo – even after the evening dances the queues for the two showers per floor were minimal.

The official high point of every course or workshop weekend naturally is the Saturday evening dance. With everyone taking that bit of extra care to look good in the group picture, dance with anyone they had not managed to dance with until then, dance once more with their favourite partners, and have great fun despite somewhat weary feet and severe lack of sleep, it was a rousing finish to an outstanding Summer Course. The only creature who might not have been quite as enthusiastic about it all was the bat that flew in through the window and decided to hang out in the eaves of the hall. While polite attempts to ask it to leave, including a lights-off break, were unsuccessful, it made its exit later at night when everyone had gone to bed… or at least moved the party elsewhere.

Because that is also one of the unique experiences of this course: The after-dance parties in the common room. Having a nice chat while enjoying a glass of wine, a wee dram and/or munching crisps and sweets to refuel is quite usual for a group of Scottish dancers – and we certainly did that! What is rather unusual, however, is for a group to continue singing non-stop until 4 o’clock in the morning… even after Thomas put down the guitar shortly after midnight. From John Dowland to Udo Jürgens, from Scottish, English and German traditionals to The Beatles (and a special rendition of Bohemian Rhapsody), the mood and the voices just carried on until getting a few hours of sleep before class became an overwhelming urge.

I know I am not the only one who went back to everyday life and work on Monday with a spring in her step and still feeling elated after this Summer Course. And, of course – looking forward to seeing everyone again at the Kuckucksnest or elsewhere in the SCD universe. 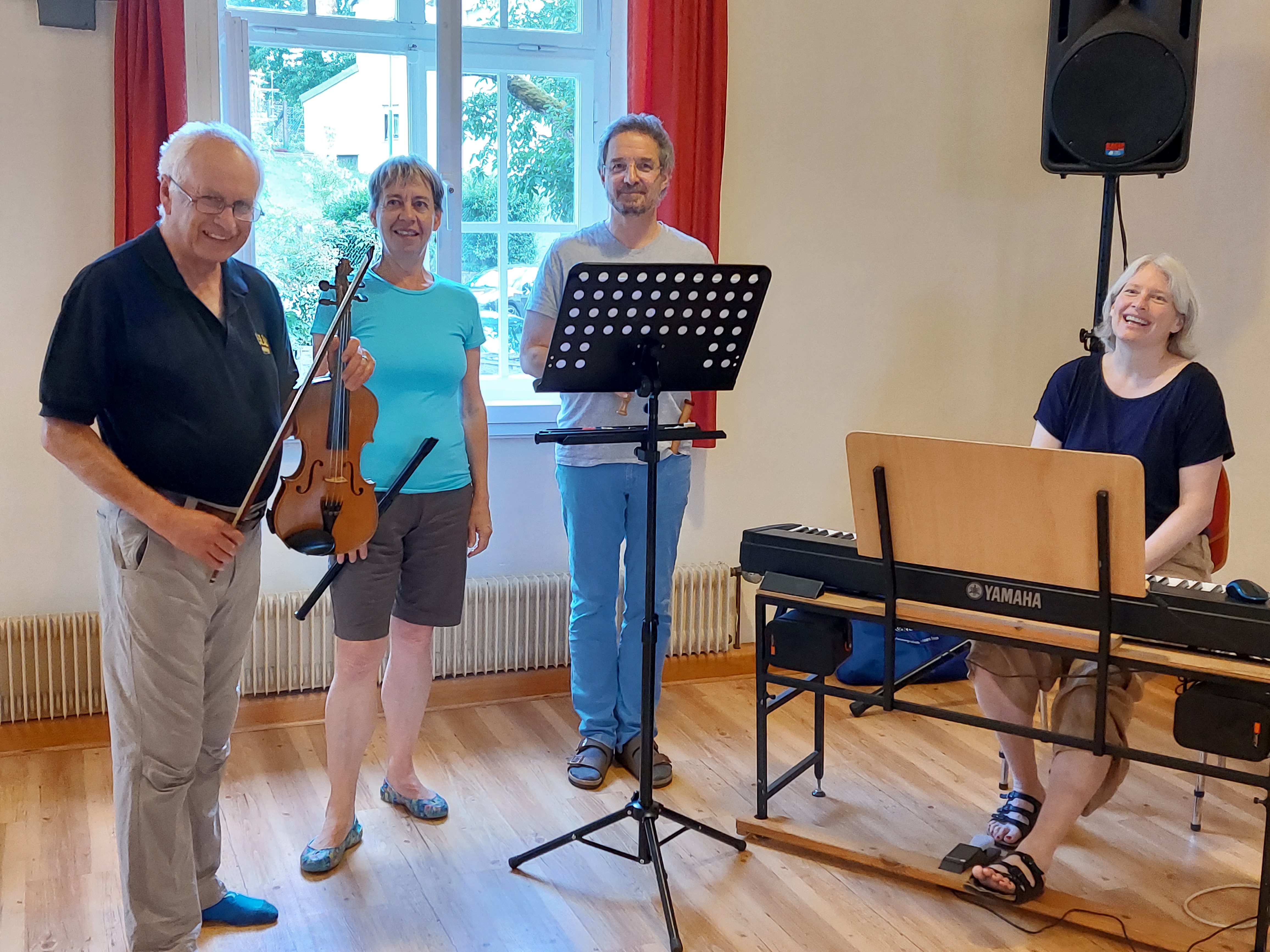